Last Saturday while John was in town, we met up with some of his friends and hit the venerable Nick's on Broadway. I had been to Nick's quite a while back for a delicious breakfast, before they moved. But I had yet to experience dinner there. I had no idea what I was in for.

Foodgasms after the jump... 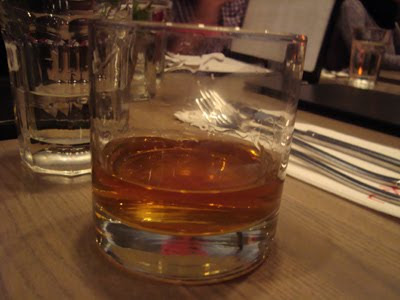 It started with the scotch. Because my man is a former drinker, who now just gives my drink a long, deep inhale, I let John order my scotch. He chose the Balvenie 21 year. Ohhhh... It was smoky and silky and amazing. If I were a very rich woman I would have Balvenie 21 flowing out of my taps instead of water.

There was an episode of Friends where Monica made an amuse bouche to start off a meal for a chef played by John Lovitz. Chandler described it as "Very amoos-ing." I'm sorry. I will think of that every time I say amuse bouche from now until the end of time. This particular palate teaser was a parmesan crisp with potato and fennel. Salty-crispy is one of my favorite flavor experiences. Very amoos-ing indeed.

I have to stop here to interject about the service at Nick's. While the maitre'd made me feel a little prickly, our waitress was amazing. She knew her stuff and was confident, friendly... and served open to the guest: something I'll always be looking for now!

Back to the food. I decided to put my foodie bliss in the hands of chef Derek Wagner and chose the three course chef's tasting menu for $45. With this option, you can choose whether you want all three dishes to be savory, or if you want the last to be dessert. You'll see how I chose shortly. With this option, you could also choose to have wine pairings with your courses for an additional $15. The tasting menu was a great choice for someone like me, who has no food allergies or strong dislikes. I love everything. BRING IT. 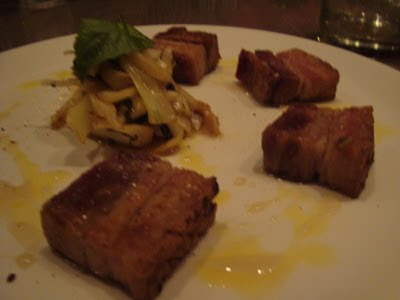 I nearly proposed to this dish. Down on one knee, the whole nine yards. But then I realized I'd be married to pork and who really wants that? So instead, I ate it: pressed pork bellies with braised cabbage, basil and chili. A carmenere accompanied the dish and its richness was the perfect compliment to these salty, complex, textural bites of happiness. 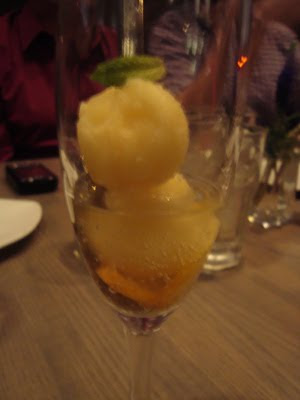 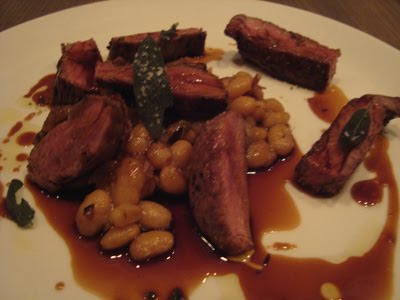 My entree was a combination of tender, juicy slices of duck breast and skirt steak, served with a white bean cassoulet. The dish was fabulous and I ate it with gusto, but I will admit that following the pork bellies, this was a lot of meat. My meat extravaganza was paired with a cabernet. 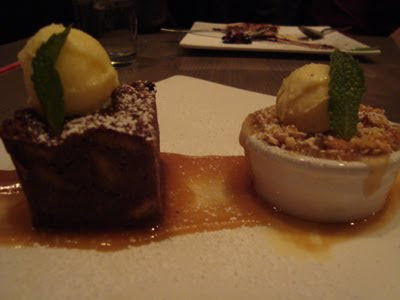 If you're suprised that after the meat extravaganza, I still had room for dessert than you must not know me very well! Behold, the gingerbread bread pudding and the apple cobbler. This warm, sweet, perfect finish to the meal was served with a dessert wine.

There were a lot of wonderful sounding dishes on the Nick's menu. But I love the idea of eating at the whim of the chef. My dinner companions, John included, chose to eat off the menu and were all very pleased with their choices - even if I was busily photographing them. I will be back to Nick's. For breakfast, lunch and dinner!

Oh yum. I can't believe we still haven't been to Nick's for dinner. We need to remedy that soon :)

I'm a big believer that dinner at Nick's is better than breakfast (and breakfast is damn good).

And I think I did marry that pork belly dish Wednesday night. Don't tell Brenda.

After such a delicious decanting of dining delightfulness, I must make NIcks, top on my to do's! Can't argue with "pressed pork" (aka - BACON), but glad to here the proposal was dropped! Kate MacDonald
Providence, Rhode Island, United States
I am a 30-something in Providence with a love for cooking and eating, plain and simple. I have equal passion for eating around town as for cooking at home, glass of wine at the ready. At 31, I realized that there was no time like the present to follow my passion and enroll in culinary school. And now, with a Johnson & Wales degree, neatly tucked in a drawer, I'm just trying to figure it all out. One bite at a time.